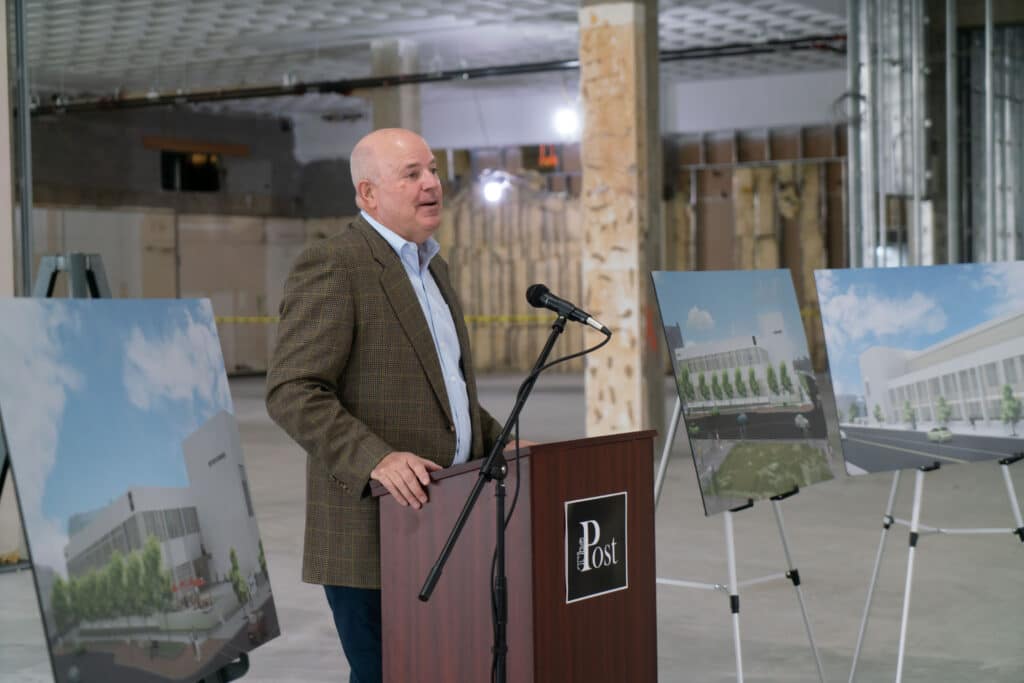 Moving forward, the facility is now known as the Post, VIP revealed during a Friday morning event inside the building. VIP Structures, a national design-build firm, currently operates at 1 Websters Landing in Syracuse.

“The decision to purchase the Post-Standard [building] in 2017 felt deeply personal, not only to be able to expand VIP Structures and our current footprint in the city but to give back to the city that welcomed me,” Dave Nutting, a Massachusetts native and executive chair of VIP Development Associates, said in his remarks. Nutting founded VIP Structures in 1975, and since that time the company has grown to include architecture and construction, development, and engineering. It has 130 employees.

VIP Structures paid $4 million for the building, according to the website of the Onondaga County Office of Real Property Tax Services. The overall project will cost $20 million, the company tells CNYBJ.

Besides VIP Structures, Chase Design will also be a tenant in the building. VIP has worked with Chase Design, which has been a VIP tenant in Skaneateles.

In addition, Advance Media will lease the remaining square footage of the existing building to continue printing the Post-Standard, VIP said.

VIP Structures will occupy a 25,000-square-foot space on the building’s first floor, Charlie Wallace, Jr., president of development, tells CNYBJ. The second floor has about 51,000 square feet of additional office space on the second floor. Chase Design is taking 40,000 square feet of the second-floor space, leaving about 11,000 of additional office space available for lease, according to Wallace.